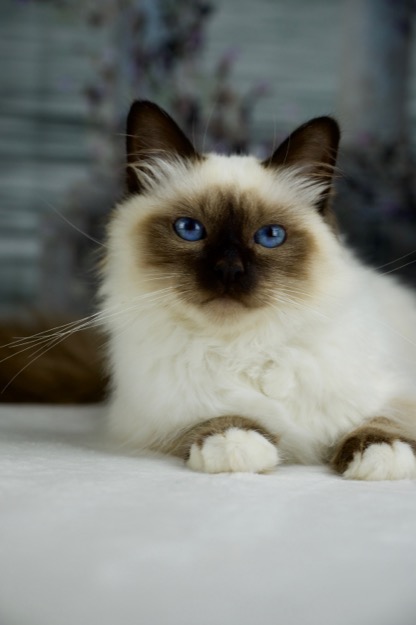 Darcy came from an old and well known cattery in Italy. When I started to breed in 2012, I wanted to buy a kitten from this cattery. Unfortunately it didn’t happen until now.

Darcy  from the first day in his new home behaved so relaxed and open hearted that enchants us immediately. He loves when we carrying him in arms, and also loves sleeping with us. First he was a bit socked from my piano playing, but step by step he usedto the loud, strange music.

He is a bit reserved from our cats, but loves being with Hungarian Champion Sábacat Betti. By now they are doing everything together. 🙂 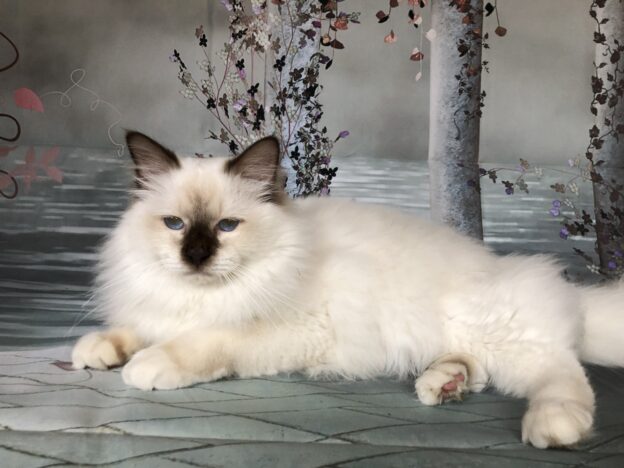 Bonbón came to us from Spain. 🙂 Extremely large strong kitten with excellent fur quality. Already at the time of our acquaintance the hotel was calm and balanced. On the trip (during the transfer flight at COVID), he was even kinder and more accepting than expected. With my little girl Anna for 5 months, every day, we looked for the right male to replace Azzurro. In the end, we chose Bonbon because, based on the video footage we received from his breeder, we suspected that, like Azzurro, we were getting a big teddy bear who was just waiting to be loved.

It took 3 days and I felt like Bonbón was born here, as if I had helped him into the world, as well as the girls he intended to be his wife! It was an incredible feeling. I was very surprised since he was about 6 months old when he arrived. She has an extremely nice open personality, even compared to Birman kittens. At that moment, he sits here in the chair next to me, purring softly. It’s like he’s always been my kitten. The only disagreement between us is that when I play the piano, he tries to hunt down my fingers … 🙂

It’s lucky that our daughters (Saba Kamil, Saba Lana, Saba Nadine) are almost the same age and love to play, grab or chase a mouse game together. Bonbón has become an organic and indispensable member of our family.

He started his exhibition and breeding career in the spring of 2022 and, as we expected, impressed the judges.

He also behaves extremely calmly at exhibitions. Don’t stress about anything. He eats, drinks, plays as if it were the most natural thing in the world to drive for long hours, sleep in hotels and spend whole days in a plastic tent. Between a million strangers and cats.

In order to become European Champion, he had to appear at many exhibitions in many countries.

And you have to receive the European Championship title from 3 judges in 3 different countries. The World Exhibition is considered a separate continent.

So we had a lot of travel, but Bombi stood up perfectly. We are really proud of him. Of course, thanks to his breeder.

At shows, the cutest case was when the judge tried to put him on all fours so he could see his height, but as soon as his feet reached the table, he immediately lied down so they could pet him. The judge struggled with him for a while, then gave up, laughed and pet him.

In addition to the titles, Bonbó also collected many nominations and was awarded BEST in Show at one of the exhibitions. As I took his huge cup, he tried to take it from me right there in my hand. I put him next to him in the exhibition tent (Sturdi) where he hugged his cup with both paws and slept like that until the end of the exhibition. It was very touching. He totally seemed to know that he got it and was extremely pleased with the judge’s decision.

Bombi’s kindness and boundless trust apply not only to people but also to cats. He turned out to be a very attentive and tender lover. He quickly became a favorite of the girls. 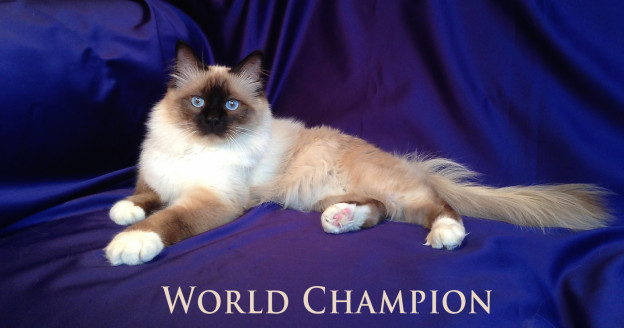 Yoda is the first stud in our cattery, Seal Point (SBI n), born in 2012, FIP,FIV,FELV negative. PKD, HCM ultrasoud scan negative, 2015. Dilution gene carrier. Yoda’ s character is diff erent from Doroty. He is not as brave or curious as she is, but he has a big heart. He is extremely attentive and gentile towards me or Doroty and Gina. He even tried to imitate mother cats calling sound to reassure a very young Frida. He was lovely. He is not the cat for everybody. He doesn’t trust strangers and even from the family he attachted to me. Always sleeps with me and follows me whereever I go. To know his personality easy to understand why he hates so much the cat shows. Although he always behave like a lord, no biting, no scratching, he never douse me or the judges any trouble, just look into my eyes ” -Do I have to?” and lay down the closest part to me in the cage. Even though I feel sorry for him, we have to participate some of the cat shows. However I promised him If he will be a World Champion he doesn’t have to participate any show… 🙂 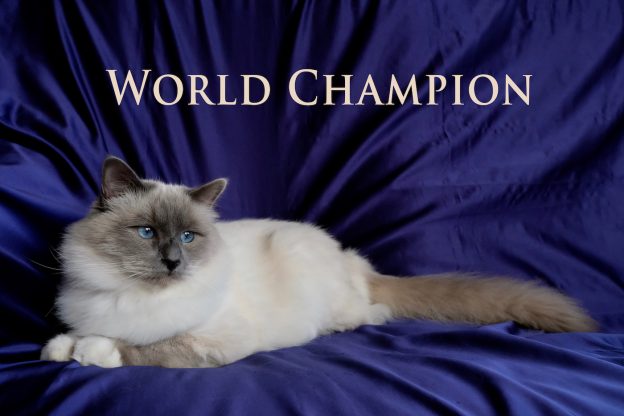